Google the redeemer! Thanks be to Google. 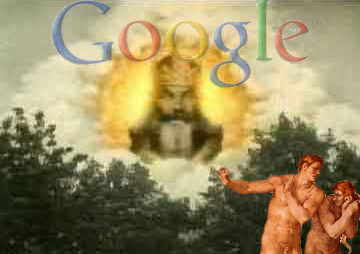 Google giveth, then Google taketh away. And then, Google giveth back again. Just as in the biblical story of Job, Google looked out across its user base and spoketh undo one who is a tempter, smiling and saying “lookth ye at my user base, how upright and righteous are they. Consider my user bshoemate.”

“Ha!” sayeth the tempter, “Take away his adsense account and he will curse and defame you!” And so Google did, accusing him of click fraud although he had done none. And in his confusion and despair he looked upon the face of Google and appealleth saying – “Why have you forsaken me?” But Google made no reply…

Long bshoemate suffered. And in darkness and despair, he looked at Yahoo, but that strange portal offered no comfort. He looked to MSN but found no solace there. He traveled to the mighty Amazon, but path was not straight, the language unclear, and lost he became.

But then, an email. “Could it be! Cahloo Cahla” he cotorted in his joy and he read the email subject aloud from his open window to the streets below: “[#249567499] Google AdSense Account Reinstated!” Sweet, sweet justice he thought.

So where are the fabled ads of yore? Has he not yet put the code back on his site? Surely he must have only commented it out. “Nah, I’m in no hurry” he said, and wiser and a wearier man he rose the morrow morn.