If someone at your company is not watching your brand on Twitter (website: Twitter.com wikipedia: Twitter) you could be missing out on valuable market intelligence and an opportunity to interact with your customers in a way that makes your brand more personal. Plugging into twitter a little each day is a good way to â€œlistenâ€ to what is happening: in the news; in your industry; and with your customers and to the web. The web is changing fast and changing society as it does. Ideas are generated in small sub-cultures and explode outward in viral waves that influence consumer behavior, innovation, even language.

If you have not heard of Twitter, heard of but never tried it, tried it but didnâ€™t â€œget itâ€, or seen the value but werenâ€™t sure how to extract it, then this article is written for you.

Twitter is a website and service that letâ€™s people â€œtextâ€ each other short messages. Unlike almost every other social network on the internet, Twitter is focused completely on this one feature. Each â€œTweetâ€ has a limit of 140 characters and looks like this on the website:

Letâ€™s look at this tweet. First, Al Gore has an objective with this Tweet, he has taken a position and he wants as many people as possible to be aware of it. He is promoting his point of view. He used 136 characters in that tweet which probably meant he spent some time carefully choosing his words to make sure it fit. 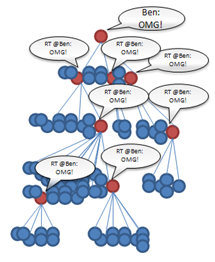 When he pressed â€œsendâ€ some of the 26,000+ people that â€œfollowâ€ him saw it on their twitter page, got it on their phone, or on some other device. Some of them then ReTweeted (RT) the message or replied to it. This in return exposed the message to their audiences. As the message was repeated the number of people exposed was multiplied. Even if they did not repeat it, but just replied to it their followers saw the response and may have clicked to see the original post.

Twitter is also a social network, but for ideasâ€¦not people.

Each user has a very simple profile, consisting of a single photo, a one sentence description, a single link, and their location. But people follow each other because of what they say, not who they are.

Of coarse you can follow your friends or influencers but unlike other social networks, you donâ€™t need their permission to listen to what they tweet (there is an option to keep your tweets private but most people donâ€™t). If your like me, you quickly realize that you donâ€™t really care about following your friends on Twitter, you already know what they think and have other ways of communicating with them. You use twitter to find the things you donâ€™t know anything about and to do that you need a diverse network.Â

Besides Barack Obama, Britney Spears, Karl Rove, Shaquille O’Neil, Lance Armstrong, everyone in Silicon Valley, almost every journalist, journalism professor, public relations professional, and executive of a internet company is on twitter. As well as lots of authors, comedians, TV personalities, thousands of web consultants (like myself @benshoemate), â€œgurusâ€ , self promoters, bloggers, and million and millions of young people.

Will they actually reply to you?

Yes, if you say something worth replying to and not just â€œOMG Iâ€™m your biggest fanâ€. Itâ€™s like at a party, if you say something intelligent, they react. In fact, if I were trying to get on the Today show, or Oprah, I think Iâ€™d start on Twitter by reaching out to their people or even the stars themselves.

Same reason you need to be. Here they are: 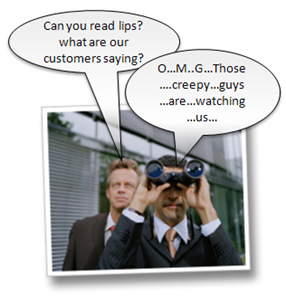 Listen to your customers

Twitter is a way to listen to what other people are saying about you, your company, your products and services, your industry,Â  your brand.

What are the people saying about your company right now? Most big companies spend lots of money conducting focus groups, surveys, and interviews to understand what people think about their products and services. This is great and necessary. But their is also something to be said for listening to the word on the street. The unsolicited feedbackÂ  that arises spontaneously. In a world where these opinions are broadcast to 100s or 1000s or people and sometimes more, bad news travels faster than ever and good news is still just as slow.

The best way to get started with Twitter is with search. Go to http://search.twitter.com/Â

Here are some samples:

Be overheard at your best

When you help a customer through phone or email you help exactly 1 person. When you do it on the web you create a piece of knowledge that can help many. When you do it on Twitter, you also build a reputation of being helpful in realtime, one on one personal way that is overheard by others. This makes your brand instantly more personal, more responsive, and builds loyalty. Companies spend the 20th century creating unresponsive industrial giants that customers tolerated but openly despised. They jumped to the first viable competition that didnâ€™t treat them like a number. The 21st century will be about using technology to return to our person to person roots.

It is tempting to follow everyone, but look for people you enjoy talking to and donâ€™t be afraid to thin the herd if you get people who post a lot of non-sense.

Some tools you need

Twitscoop.com â€“ See what is buzzing. When something happens in the world, it shows up in twitter first. As it is tweeted, retweeted, and discussed, that term used a lot. Below is a live feed from TwitScope. The larger a term is, the more it appears in recent tweets. The website itself is better because it shows those actual tweets when you hover over it.Â

Tweetchat.com â€“ On Monday nights at 7-10pm CST if your watching Twitscoop youâ€™ll see word #journchat get really big. This is aÂ  weekly conversation between journalists, bloggers and PR folks (http://journchat.info/about/) Twitter users use #topic to tag conversations that are all related. They do this for 2 reasons. First, they know lots of people have open searches for that word #topic. Second, other services like tweetchat create chat rooms out of these. I strongly suggest you try tweetchat during the Monday, 7-10pm CST time. Other #topics – #gaza, #haiku, and if there is any conference, concert or other large public event like #inaug09 then there will be a # for it. This is a great way to see the real power of twitter.

Tweetdeck.com â€“ A tool that lets you keep several searches open at once as well as twitscoop. If your only going to spend a small amount of time in Twitter each day, install Tweetdeck, open some searches, and join in the conversation. @tweetdeck

What is the meaning of “semantic web”?

What is the meaning of “semantic web”?