Why the Japanese love wikis, the French love blogs, and the Germans love…testing?

Look at this Google trends search comparing the terms “wiki, blog, music, movies”. It would appear searching for music online is in decline (but there is a definit Christmas time bump as people fill there new iPods and laptops with movies and music). But look at the steady climb of blogs and wikis, they are almost as popular now as online music (the term MP3 follows music but is lower).

So what’s the deal? Why are blogs and wikis so popular? Are they really as popular a search term as music and movies? To try and find the answer I looked at the cities and countries where the data comes from. Blogs are dominated by the French and Vietnamese? 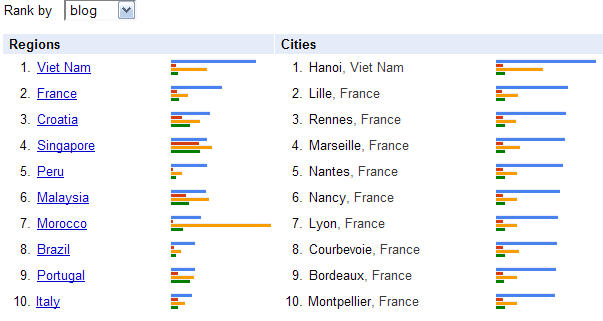 The word blog returns 3,510,000,000 results worldwide on Google (that’s 3.5 Billion with a B). My research (consisting of asking Google “blogs popular in france”) returned this article. Although it is already 2 years old, it asked the same questions and reports that users of France’s most popular blog spent over an hour there on average versus just 12 minutes in the US.

French blogs stands out in other measurable ways. They are noticeably longer, more critical, more negative, more egocentric and more provocative than their U.S. counterparts, said Laurent FlorÃ¨s, the French-born, New York-based chief executive of CRM Metrix, a company that monitors blogs and other online conversations on behalf of companies seeking feedback on their brands.

“Bloggers in the United States listen to each other and incorporate rival ideas in the discussion,” he said. “French bloggers never compromise their opinions.”

Wiki appears to be crazy popular in Japan. Just look at these results:

Let’s ask the same question. First some anecdotal evidence, like this article about a Japanese government official caught doing something he should not have been on the internet…editing wikipedia articles about the robot toys known as Gundam?
I love this quote:

“The agriculture ministry is not in charge of Gundam,” ministry official Tsutomu Shimomura said.

The agriculture ministry verbally reprimanded five other bureaucrats who contributed to entries on movies, typographical mistakes in billboard signs and local politics. The six employees together made 408 entries on the popular Internet encyclopedia from ministry computers since 2003.

One term I that myself use a lot is the word “test”. When ever think my internet connection may have been lost, I open my browser, and just to make sure I’m not looking at a cached version of google, I type test. I figured I was not the only one so test is pretty high on google’s rankings. The suprising thing is where it is popular. 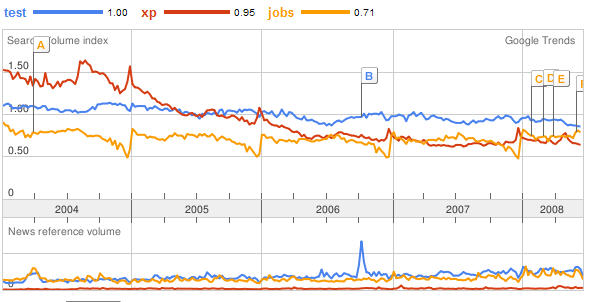 Note that I graphed it versus, xp and jobs. Both of those show new year increases (one for new christmas computers, the other for new years resultions I imagine).

But look how steady test is, which fits my theory that the term “test” is used to actually test google. Now look at the regions:

The Germans are not only number 1, they dominate with the top 5 cities. What is going on here? It does fit the sterotype.