Speaking English in Business (aka Getting things done in English) 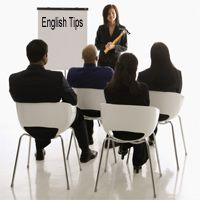 Most of the work I do is related in some way to communication. I take it seriously enough that it actually hurts me when I am misunderstood. The potential for misunderstanding is magnified on large international projects even when everyone speaks English. English is spoken all over the world by over a billion people, but most of these people speak it at a very basic level as a second language. Even among people who grew up speaking English, it is sometimes difficult to communicate and misunderstandings are common. As a consultant, I work with people from all over the world. They all speak English in very different ways, with different accents and very different cultures. I just finished an international project where the team was 40% Japanese, 20% American, 20% French, with the rest of the team coming from Mexico, Russia, Spain, the Netherlands, India, Australia, Canada, and Brazil.

I have advice for everyone speaking English who is trying to say something important:

Bottom line: The world is getting increasingly diverse and subtle points get lost, if you want some one to do something it is important to communicate clearly.

Where were you during the internet gold rush?

Where were you during the internet gold rush?