Is the open source community capable of innovation? 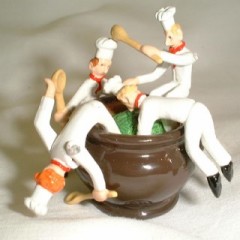 The Linux community has done a good job of copying Windows. Open Office does a pretty good job of copying Microsoft Office. Now there are open source versions of YouTube and MySpace. But where is the innovation? Firefox and its multitude of plugins seems to be the one exception. Meanwhile, companies like Apple – a company that is incredible closed, and secretive has created one innovative product after another. Why is this?

I have been looking at how communities like digg, slashdot, wikipedia, and other smaller forums operate. There does seem to be a conservative nature to large crowds. Mainly because the urge to contribute is high. So high, that people want to comment or tweak something even if they have no real expertise. Another issue is that as soon as some one mentions a novel or creative idea, there are 50 people eager to chime in with why its a bad idea. The burden then falls on the innovator to defend their idea. Without sources or previous examples they can cite (we are talking about innovation after all), the idea simply drowns beneath an ocean of criticism. Anyone surveying the discussion will conclude the idea was shot down.

This is all just speculation on my part. It will take more than just a few case studies to uncover any true underlying pattern.

Download a backup of wikipedia to your laptop or local lan

Download a backup of wikipedia to your laptop or local lan